If you are not living under a rock, you must already be aware of Firefall at Yosemite National Park. Just kidding, even we got to know about it last year through mom, she watched it on TV in some kind of documentary. Social media is a powerful tool these days, so it’s very much possible that most of you have at least heard about it.

Basically, Firefall is an imitation of flowing lava by a small water stream known as Horsetail Fall over the eastern edge of El Capitan in Yosemite Valley. This phenomenon is time sensitive and you need to be actually lucky and patient to witness it.

– It happens only in winter evenings, typically from mid to late February.

– The Sky must be clear and the weather should be sunny for this phenomenon to happen.

– There should be enough water flowing from the waterfall.

– The sun rays should fall perfectly over the fall to start the effect.

If all the above conditions are met, don’t celebrate, you still need to fight for a parking spot. The parking spaces are very limited and they get filled very quickly. People start occupying the area near the waterfall from as early as 2 o’clock so getting parking is no less than winning a lottery.

We were in Los Angeles when read about the Firefall in a news article that it is likely to happen now, immediately planned to visit Yosemite National Park. We booked White Chief Mountain Lodge for 2 nights and it was just 5 min drive away from the south entrance of the national park. Still, Yosemite Valley which contains most of the attractions of the park was a 1-hour drive from the entrance. Our lodge property manager was a nice lady and she advised us to reach the area at around 3:30 PM to witness the Firefall due to the overwhelming crowd. She also told us that all properties in the area all fully booked.

On our first day of the trip, after a difficult hike, we decided to leave for El Capitan at around 3 PM. We were late and the roads were already full of traffic. Our car was parked by the roadside near (P3)parking spot (where we wasted almost half an hour in search of parking space) of Curry Village.

To control the situation, portions near Horsetail were closed and northside drive was divided into two sections- one for pedestrians and the other for vehicles. The nearest parking available to the fall is P1 and you will have to reach there very early to claim the space. If you are lucky and able to park at P1, you still have to hike 1.5 miles (one way) to reach the place.

So we drove all the way from Curry Village to El Capitan, Yosemite Loge parking was full and so was the case with P1. No stopping or parking was allowed on northside drive, so we just continued. There was literally no place to park, we were highly disappointed. There was an instance when we thought of postponing the idea, but then we found an empty area by the roadside on southside drive and parked there(No other option). Then we had to hike all the way back to El Capitan which was overcrowded now. Forgot to mention, Harmit had a fall during all this adventure, she slipped on an icy patch and got a little lightheaded. Poor girl hiked even after all this to see the natural phenomena everyone was so crazy about.

We reached El Capitan at around 4 PM and the effect was not yet visible. There were no proper markings to indicate which fall is Horsetail or which creek we need to look for. Everyone looked confused. We firstly asked a park ranger managing the traffic and he advised us to go further (till we notice crowds) for a better view. Once we reached there, we confirmed the location with a calmly sitting guy. Harmit took a spot on a log on the ground while I set up my camera on a tripod just behind her.

It was like some kind of event, everyone was laughing, enjoying, chit-chatting. We noticed many photographers with tripods and big, bulky cameras. Now all we need to do was WAIT. 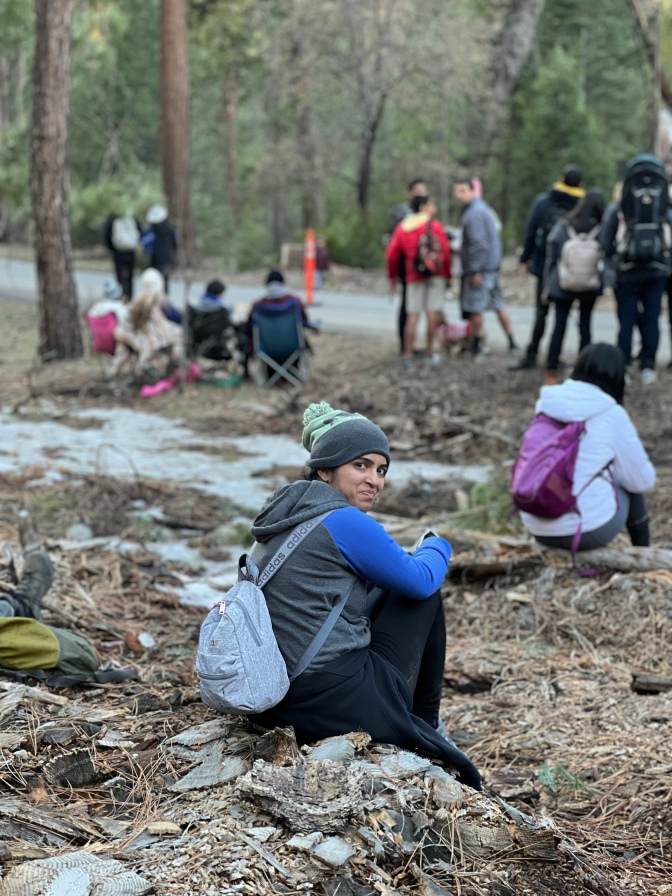 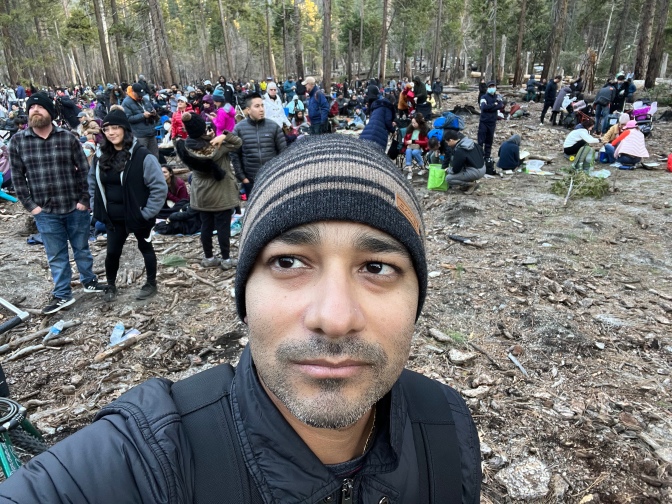 The waterfall was dry, there was little moist which can be seen through binoculars. Due to this reason, the effect was not as perfect as we had seen in the pictures, but still, it was unique. It was very cold, good we were well prepared.

As soon as sun rays fall at the desired angle, the effect starts to appear. We took numerous shots during our time there (almost 1.5 hours), we stayed till sunset, till the effect was no more visible. 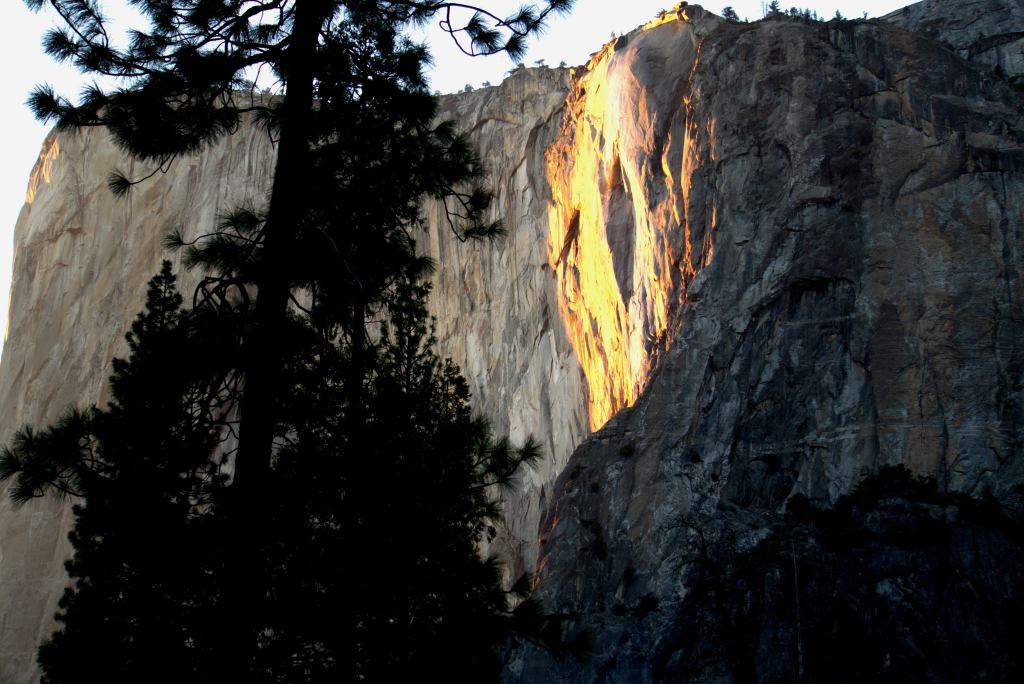 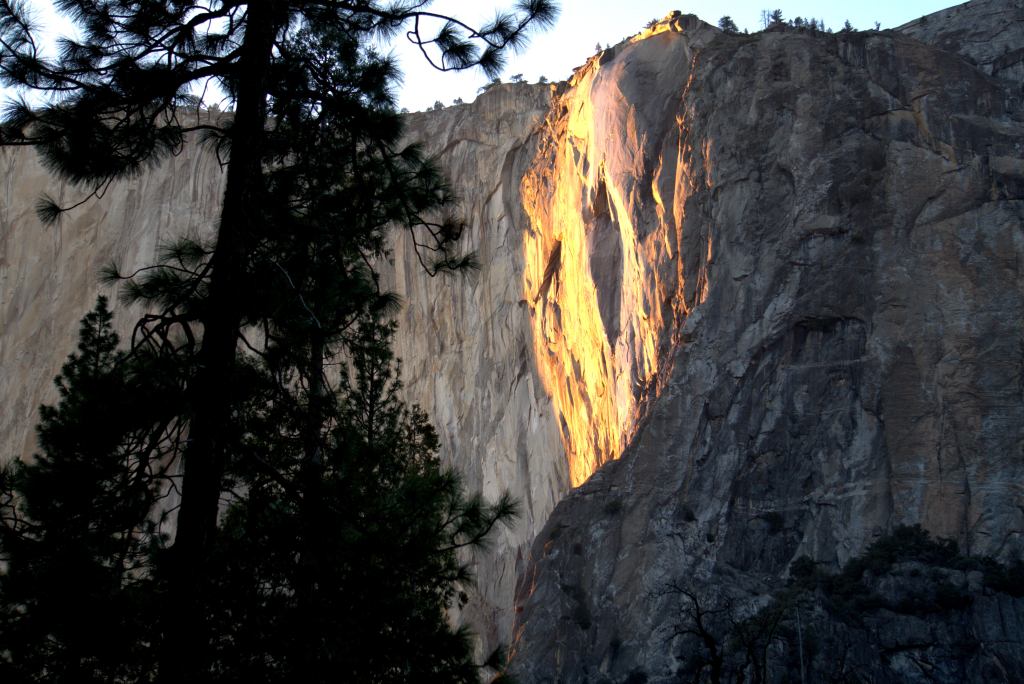 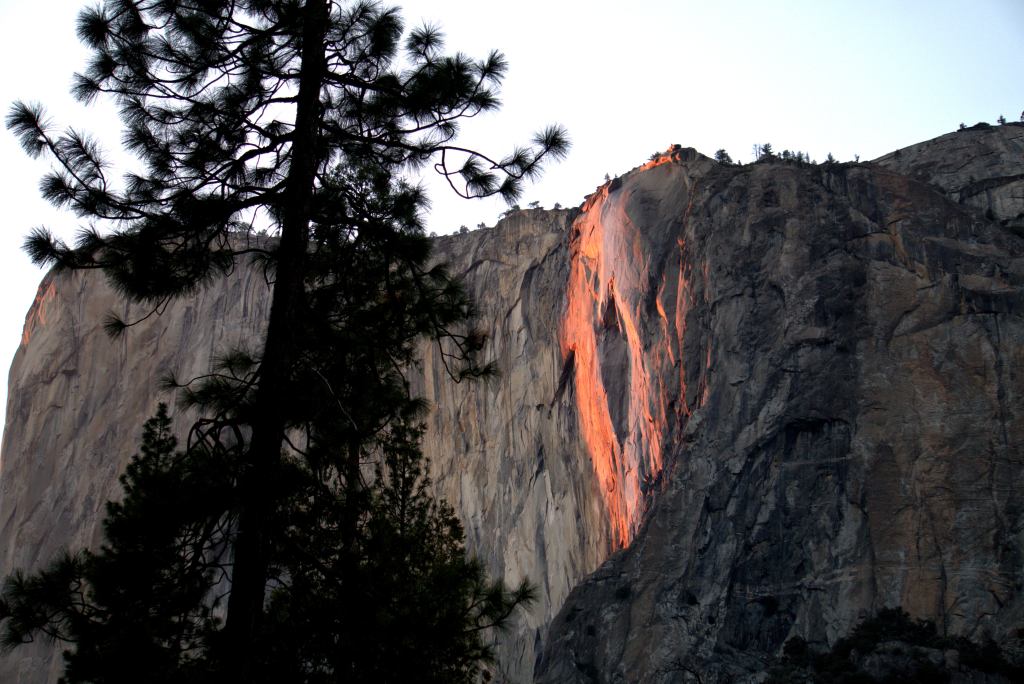 You can notice the different phases of the Firefall in the above pictures. As time progressed, the Firewall looked more distinct. It actually looked like flowing lava, thanks to the wonderful nature.

It was getting dark so we headed back to our parking spot. Thus another hike, we felt like moving in a big herd of zombies walking together to an unknown destination. Walking like this in COVID was never our choice, we tried to avoid the crowd, but that was impossible. The happiness on our faces was unmatchable when we reached our car. All that tiredness was worthy due to that beautiful effect, but the rest of the night was painful indeed. Exiting from the park was the most difficult part, all paths were jammed now. We were stuck for 2 hours in our car with the traffic. Traffic was not even moving, I actually had to turn off the engine while Harmit took a nap. The park rangers did their best and finally, traffic got cleared at around 9 PM and we reached our lodge at 10 PM. Bummer, no dinner!

Overall it was a great experience, but annoying due to the massive crowd.

Let us know if you have seen Firefall yet? If not, would you care to?

Yes it was. Even though little inconvenient, but totally worth the trouble. 😊